How I’ve sought to define what is Time

I need to explain

This is my little window … 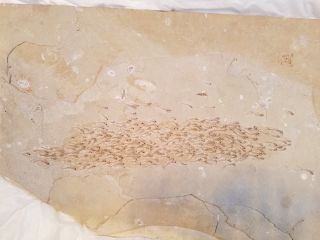 This 50-million-year-old fossil, held by a museum in Japan, shows 259 fish swimming in a school — one of the earliest known examples of coordinated group behavior ever.
(Image: © Mizumoto et al.)
A newly described fossil that shows 259 baby fish swimming together in a school, approximately 50 million years ago. According to the authors of a new study published Wednesday (May 29) in the journal Proceedings of the Royal Society B, this may be the earliest known fossil evidence that prehistoric fish swam in unison, just as modern fish do today.

A team of Arizona researchers stumbled upon this remarkable rock during a visit to the Oishi Fossils Gallery of Mizuta Memorial Museum in Japan. Working with the museum, the researchers determined that the fishy fossil probably originated in America’s Green River Formation, a geologic stratum in present-day Colorado, Wyoming and Utah that contains a trove of fossils dating to between 53 million and 48 million years ago.

The fish in question all belonged to the extinct species Erismatopterus levatus, and were apparently entombed together in the midst of a routine swim that may have been cut short by an underwater avalanche of sand. All but two of the specimens were swimming in the same direction and in a close-knit formation.

I am an Amateur Gynaecologist with a love of Maidenhair Ferns and a fondness for interpreting Vermeer's Paintings as Metaphors ...