Skip to Content
By continuing to use this site, you agree to the use of cookies. Find out more 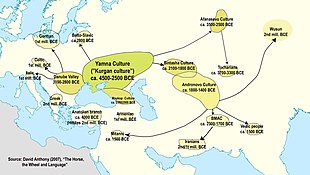 According to David W. Anthony, between 3100–2800/–2600 BCE, a real folk migration of Proto-Indo-European speakers from the Yamna culture took place into the Danube Valley. These migrations probably split off Pre-Italic, Pre-Celtic and Pre-Germanic from Proto-Indo-European.[1] Hydronymy shows that Proto-Germanic homeland is in Central Germany, which would be very close to the homeland of Italic and Celtic languages as well.[2]

The origin of a hypothetical ancestral “Italo-Celtic” people is to be found in today’s eastern Hungary, “kurganized” around 3100 BC by the Yamna culture. Subsequently, the Urnfield culture, also native of the Hungarian plain, expanding to the west would have brought this people in Bavaria and in Austria, where it evolved in the Proto-Celtic people, while the proto-Italic people would have formed from the “Italo-Celtic” tribes who remained in Hungary, then penetrating in Italy during the late 2nd millennium BC through the Proto-Villanovan culture.[3]

This hypothesis is to some extent supported by the observation that Italic shares a large number of isoglosses and lexical terms with Celtic and Germanic, some of which are more likely to be attributed to the Bronze Age.[4] In particular, using Bayesian phylogenetic methods, Russell Gray and Quentin Atkinson argued that proto-Italic speakers separated from proto-Germanic ones 5500 years before present, i.e. roughly the start of the Bronze Age.[5] This is further confirmed by the fact that Germanic language family shares more vocabulary with the Italic family than with the Celtic language family.[6